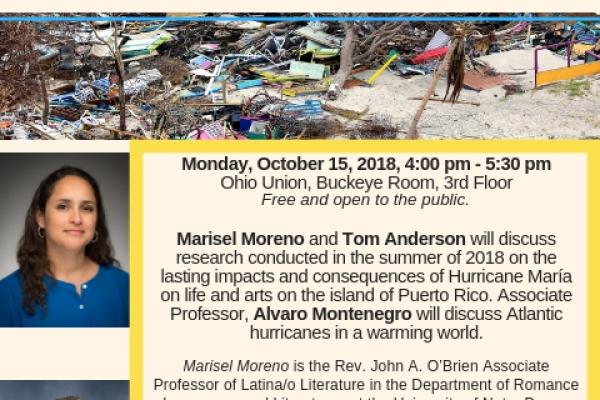 Free and open to the public.

Marisel Moreno and Tom Anderson will discuss research conducted in the summer of 2018 on the lasting impact of Hurricane María on life and arts on the island of Puerto Rico. Associate Professor, Alvaro Montenegro will discuss Atlantic hurricanes in a warming world.

Marisel Moreno is the Rev. John A. O’Brien Associate Professor of Latina/o Literature in the Department of Romance Languages and Literatures at the University of Notre Dame.  She is the author of Family Matters: Puerto Rican Women Authors on the Island and the Mainland (University of Virginia Press, 2012).  In 2011 she received the Indiana Governor’s Award for Service-Learning and in 2016 she received the Sheedy Excellence in Teaching Award from the University of Notre Dame’s College of Arts and Letters. Professor Moreno’s teaching and research interests include Latina/o-Caribbean authors, as well as Afro-Latina/o and U.S. Central American cultural production. Her articles have been published in His-panic Review, Latino Studies, Studies in American Fiction, Afro-Hispanic Review, CENTRO, The Latino(a) Research Review, MELUS, Hispanic Journal, and Sargasso, among others. With Prof. Anderson, she co-curated and co-authored the catalog for the exhibit Art at the Service of the People: Posters and Books from Puerto Rico’s Division of Community Education 1949-1990, now at the National Museum of Puerto Rican Arts and Culture in Chicago. Professor Moreno is currently working on her second book project, provisionally titled Bordering the Archipelago: Undocumented Migration in the Cultural Production of the Hispanic Caribbean and Its Diaspora.
Thomas F. Anderson is the Dr. William M. Scholl Professor of Latin American Literature and the chair of the Department of Romance Languages and Literatures at the University of Notre Dame. He is a specialist in the literature, history, and cultures of the Hispanic Caribbean, and he has offered classes, lectured, and published widely and on a variety of topics related to the region. An expert on modern Cuba, he is the author of Everything in Its Place: The Life and Works of Virgilio Piñera (Bucknell University Press, 2006), Carnival and National Identity in the Poetry of Afrocubanismo (University Press of Florida, 2011), and Piñera corresponsal: una vida en cartas (IILI, Pittsburgh, 2016). Professor Anderson has published in numerous academic journals including Casa de las Américas, Revista Iberoamericana, Hispanófila, Revista Interamericana, Revista de Estudios Hispánicos (St. Louis), Revista de Estudios Hispánicos (San Juan), Latin American Theatre Review, Afro-Hispanic Review, MELUS, La Simepreviva among others. Anderson is presently working on a book project that focuses on images of the U.S. Civil Rights Movement in Cuban Poetry, and a translation of his second book will appear in Cuba in 2019.
Alvaro Montenegro Associate professor at The Ohio State University's Geography Department (arrived in Cbus in 2012). BS in Oceanography Rio Grande University, Brazil; MS in Physical Oceanography, University of São Paulo; Ph.D. Physical Oceanography, Florida State. Postdoc (UVic, British Columbia) and Assistant Professor (StFXU, Nova Scotia) in Canada. I work with global climate dynamics and past human-environment interactions and frequently use numerical models as tools.

Reception following the event for informal conversation among participants.